PLEASE NOTE THAT THERE WILL BE NO 2020-21 AWARD DUE TO THE IMPACT OF CORONAVIRUS ON LIVE PERFORMANCES.

The Daniel Day-Lewis Award was first introduced in 2012/13 by Cllr Mary Vincent.  Being aware of the young talent in Petersfield and noting that Daniel Day-Lewis, who had lived locally, and had won his third Oscar.

To be eligible for nomination you must live or perform in Petersfield and be under 18 years of age.

Local Theatre Groups & Schools are invited to nominate a young person they believe should be recognised for their achievements in Music, Theatre & Performing Arts.

Applications are invited from 1st September and the deadline is 31st January the following year.

The winner is announced at the Annual Town Meeting which is held in either March or April. 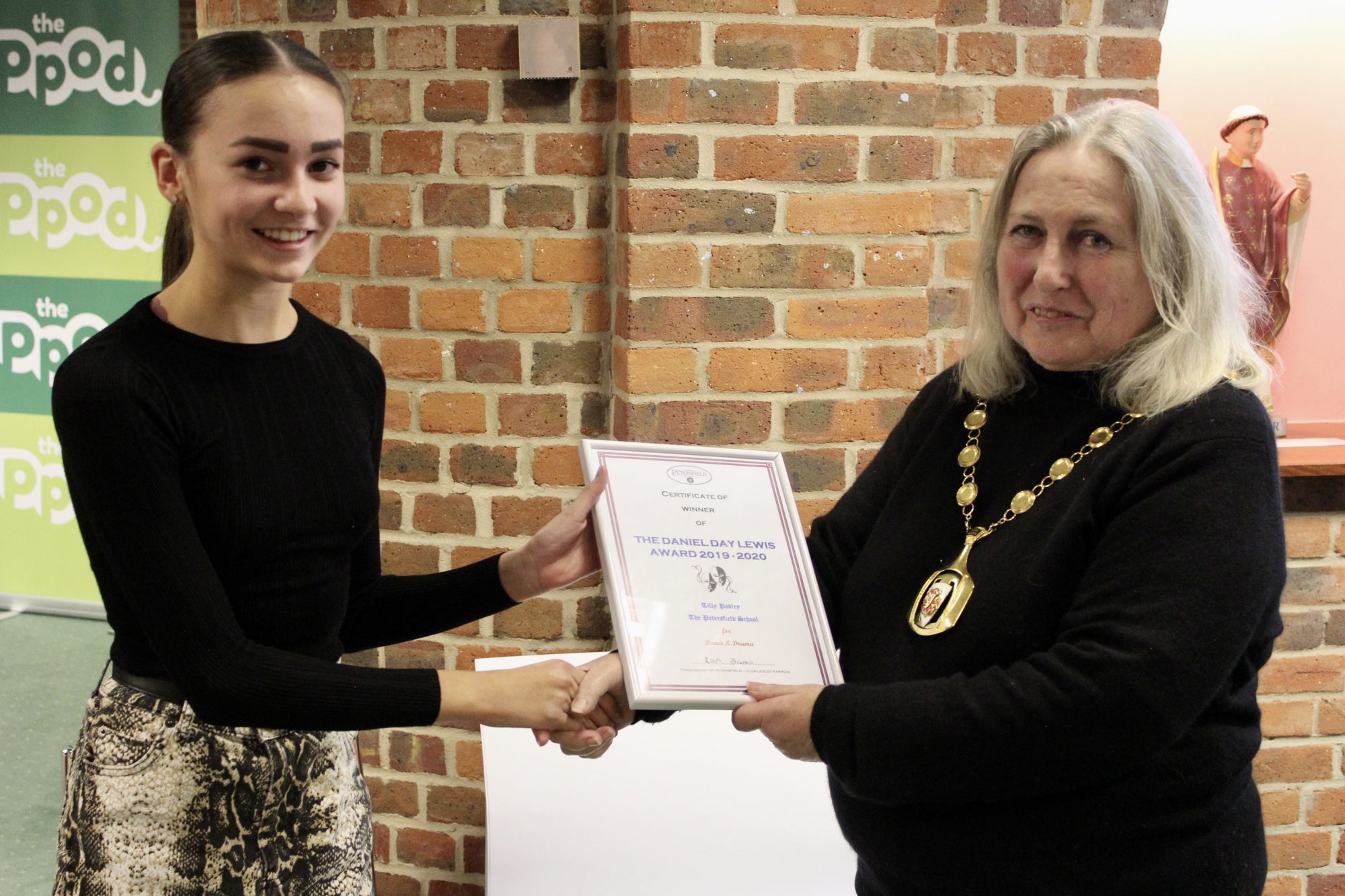 Throughout her time in TPS Tilly has been hugely involved in both dance and drama, not only in school but outside of school as well.

Tilly has been: Dodger in our school production of Oliver 2018 and is currently playing Lambchops in our school production of Fame 2020. She has performed for the past four years in our Rock challenge pieces. As well as this she has performed in a number of performance evenings throughout her years at TPS. Tilly is also involved in a wide variety of dance and performances outside of school of which she has excelled.

Tilly works well with all students, she is extremely supportive and helpful. During the school musical she has spent time teaching choreography to other students and through her Performing Arts Prefect role she has been leading dance club. When she was in lower school she danced in a range of GCSE choreographies giving up her lunch times and after schools to rehearse. She always inspires and challenges other students to be the best they can be.

Tilly is a very conscience students who always completes work to the best of her ability. When she was Dodger in Oliver she was only in Year 9 taking on a lead role with maturity and finesse. We can specifically pick one moment because what ever she takes on is always outstanding!

Tilly is someone who always give 100% in everything she does, she cares about others and always shines. 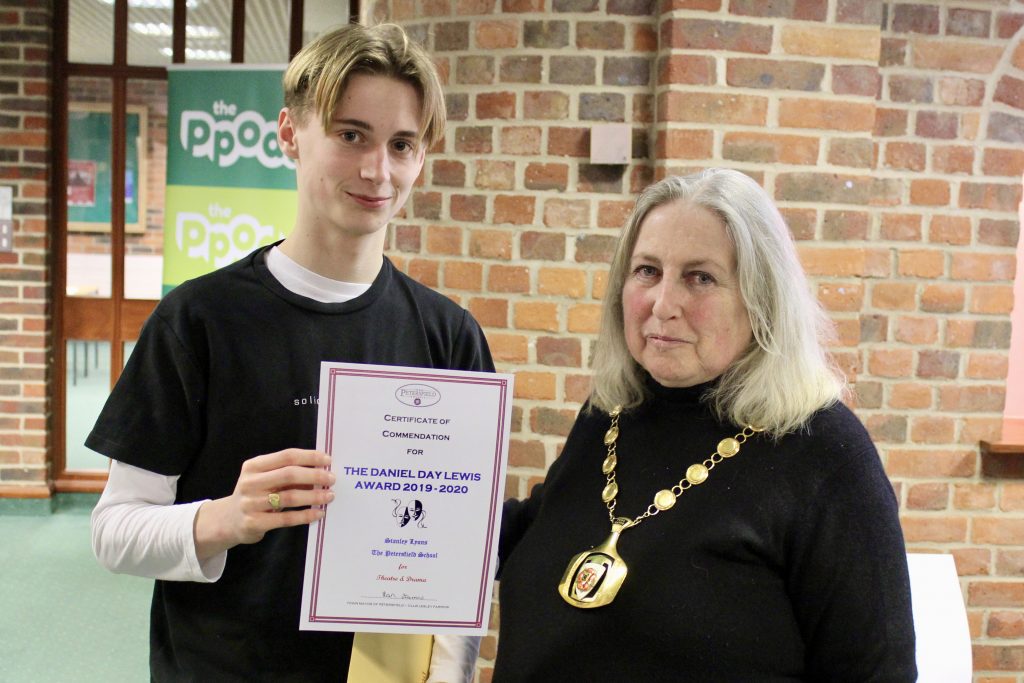 Following a back injury, Stanley turned his attentions to his study of the guitar. Stanley is a fantastic performer who works tirelessly to learn new repertoire. He performs with his own band on guitar and vocals and plays guitar in the school House Band and the ‘Musical Band’.

In Stanley’s final year at school, he has taken on the challenge of playing guitar in our musical – Fame – to be performed at the New Theatre Royal in February. This has involved working through a lengthy musical score with numerous solo parts within the songs including the most famous ‘Fame’ riff. He has been at every rehearsal and prepared his part meticulously.

Stanley joined the School House band 2 years ago and has learnt a repertoire of more than 20 songs ‘as performed’ by the original artist whatever the genre. He has performed publicly in Petersfield with the Band on numerous occasions. With his own band, notably they played at the Victorious Festival in 2019 and were runners up in the Metropolis-Blue Song Writing Competition through the Academy of Contemporary music in Guildford, winning equipment for the school. 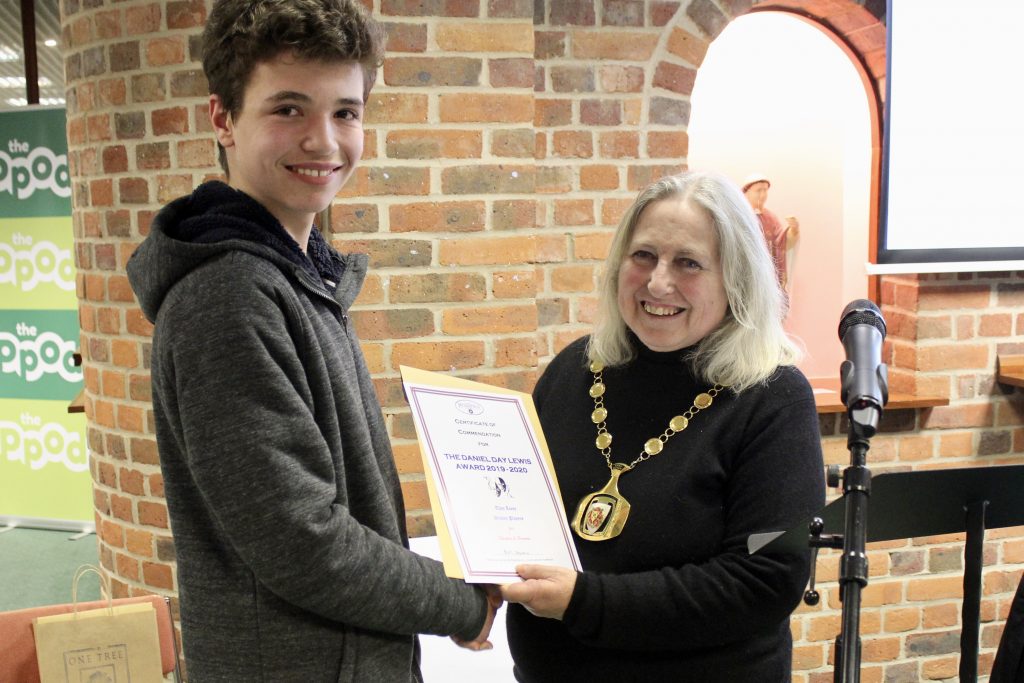 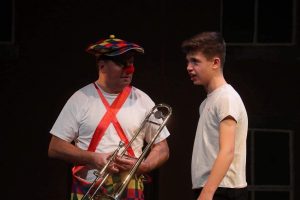 Theo in his role as Shane.

Theo has built on his years of participation in Winton Players junior club to take a leading role in Winton Players autumn production of Brassed Off. This was a complex and difficult role to undertake which he did with a mature professionalism to great reviews.

The role Theo undertook involved him having to work well within an adult based team. He also took on responsibility for mentoring the other junior cast members helping them to know when and where to be on stage as well as passing on help with directors notes and demonstrating what is achievable through the Winton’s Junior process.

Although Theo has shone in smaller roles throughout his time with Winton Players, his role as Shane in Brassed Off allowed him to show all of his skills in a way never possible before. The feedback from the production always highlighted the emotion that Theo was able to portray even when dealing with mature themes.

Being part of a drama group is about more than just being on stage. Theo has shown a great understanding of this process and his dedication to the group has been seen through involvement in non-stage based activities truly showing team spirit and a greater understanding of what drama groups are all about.

Theo has been a committed, active member of Winton Players for 5 years, taking part in our Junior Club nights, taking minor roles in Petersfield’s Proper Panto and special members productions. It has been a delight to see him develop his confidence and acting skills over this time and I was privileged that he auditioned for the role of Shane Ormondroyd in Winton Players October production of Brassed Off.

The role of Shane was a principle role within the production and a large part for any individual to undertake. It was going to be a big role for anyone to take on and in previous productions it has entrusted to an adult cast member. From Theo’s audition it was clear that he would be more than capable to take on the challange himself.
Theo’s audition showed a level of preparation that is rare even amongst adult, particularly the grasp of the Yorkshire accent that would be pivotal to the role.

During the rehearsal period Theo was a pleasure to work with. He followed direction brilliantly, listening to feed back and taking notes and comments on board. As well as taking direction Theo often asked questions about his characterisation and fed in his own thoughts to the discussion to allow him to create a full character which he understood and connected with.

Theo’s dedication did not stop at rehearsals with reports from his parents of his reading of his lines before bed, even when on holiday his script was never far away.

As well as focusing on his character, lines and direction, his role also required him to work with two younger junior Winton Players who took on the role of his younger brother and sister. Theo took on the role of supervising the junior cast members, ensuring that they were on stage when needed, followed the directions given and acted as a role model to them. This additional responsibility shows a level of maturity that Theo should be proud of.

In addition to working well with the younger members of the cast Theo also worked well with the adult cast members, focusing when needed but also bringing a welcome cheeky humour to proceedings where appropriate.

The production of Brassed Off deals with mature, adult themes and the plot is led by the character undertaken by Theo. The play uses the memories of Shane as a window to the lives and events of the coal pit closures in the 90’s in the north of England. This is a subject matter that is still delicate today and Theo showed an understanding of this during the production and certainly showed it in his performance.

Theo’s character opened and closed the show with monologues delivered directly to the audience, a difficult skill to pull off at any time, but even in front of large audiences he was not phased, showing the confidence that he has developed over the years with Winton Players.

There is no doubt that the last lines of the play, delivered by Theo are some of the most emotional and poignant of the whole production. Theo certainly rose to the challenge and demonstrated all of his hard work and skill, gained not only from his time working on Brassed Off but from other experiences to ensure that the audience were left feeling the emotion of a young boy who had lost his role model and hero, whose relationship had been built so successfully through the rest of the play.

Being a member of a drama society like Winton Players is not just about the roles you undertake. It is also about the commitment you show to the society as a whole, partaking in society events and off-stage activities. Over his 5 years as a member of Winton’s Theo has shown that he understands this by being actively involved in off stage activities and supporting others when not in a role.

Theo is a very skilled young actor who in 2019 undertook a challenging role in a challenging production and succeeded in delivering a relatable character who was able to make audiences laugh along with him as well as feel his pain. His dedication to improving and developing is never in question and I look forward to being able to work with him again in the future and seeing what else he is capable of achieving. 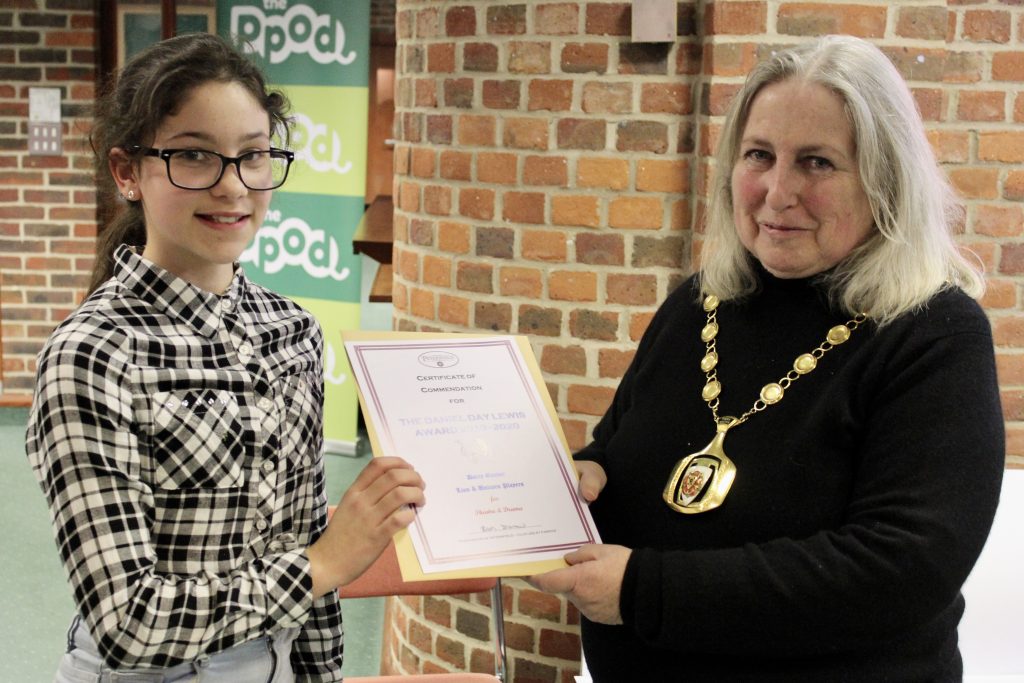 Darcy took the lead role in the Lion & Unicorn’s play Kindertransport, assisting fellow actors when they ‘dried up’.  Darcy spoke in German for large parts with lots of nice long monologues; she also sang and played harmonica.  This was a huge undertaking for only her second time on stage, showing lots of expression and physicality.  Darcy has a great relationship with fellow actors. 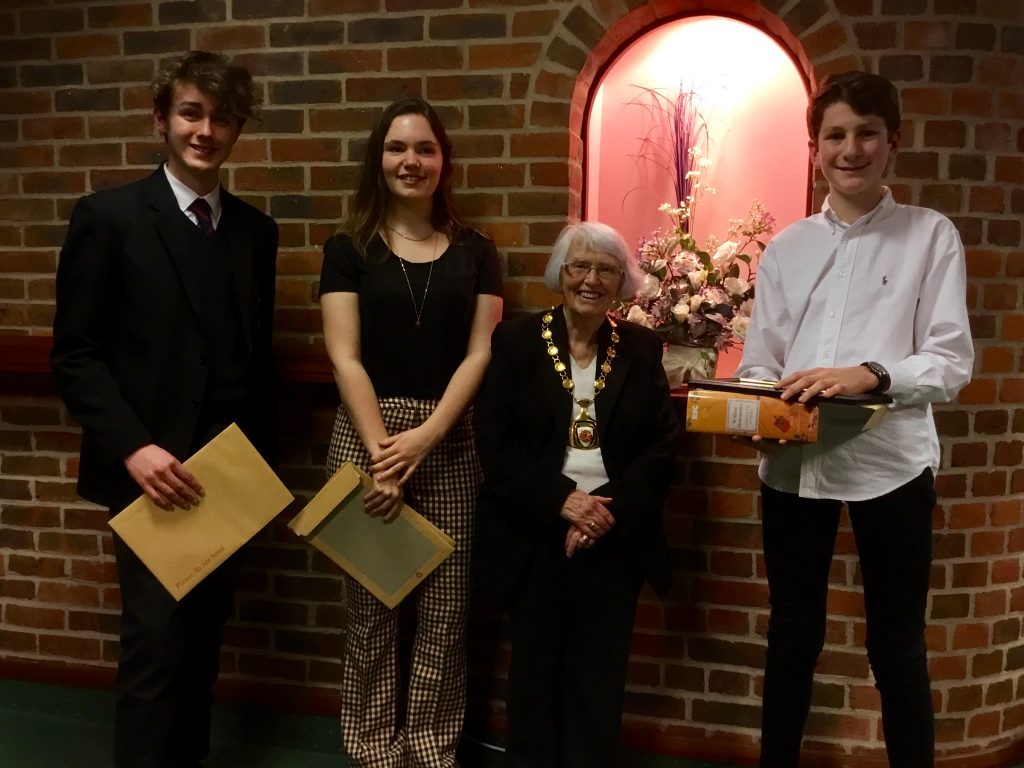 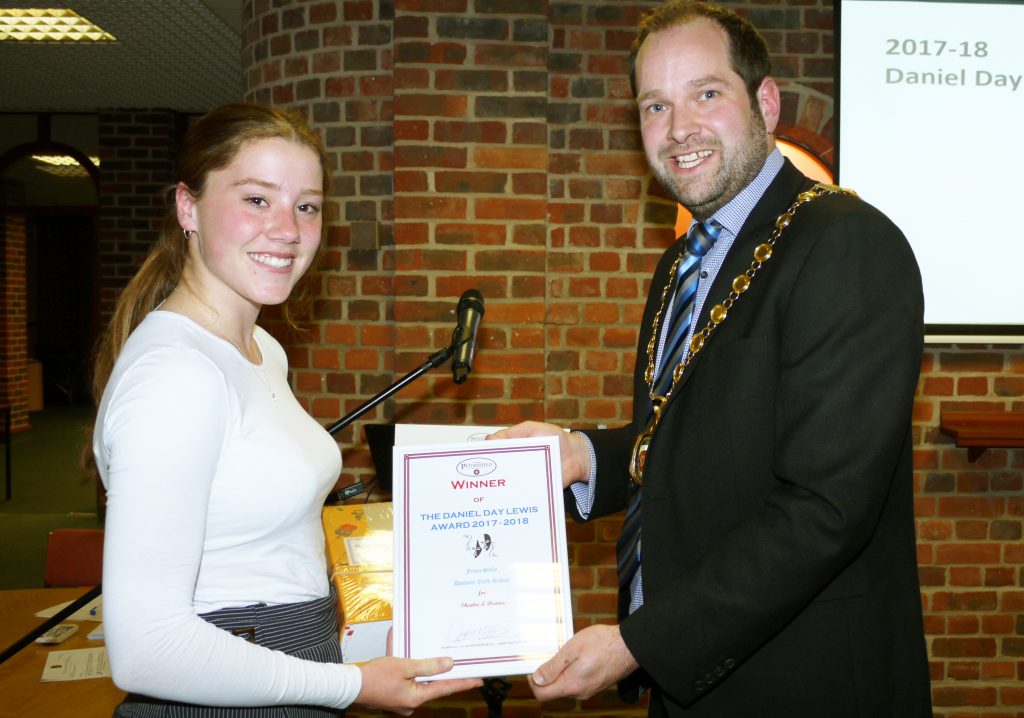 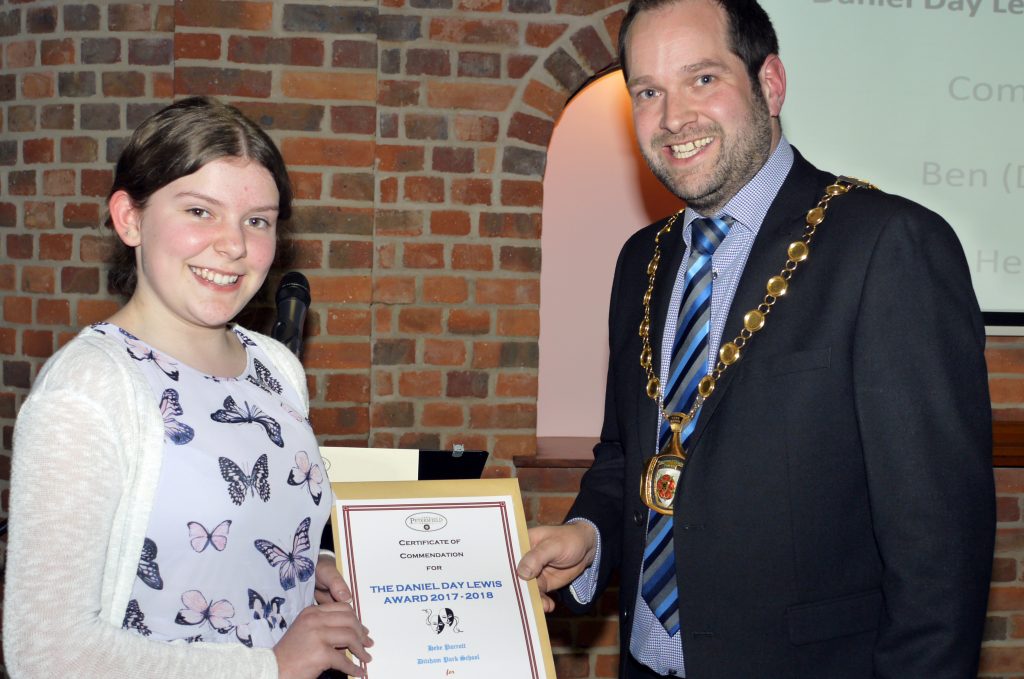