Special thanks to Peter Thwaites, John Stabb and Jamie Matthews for providing images. 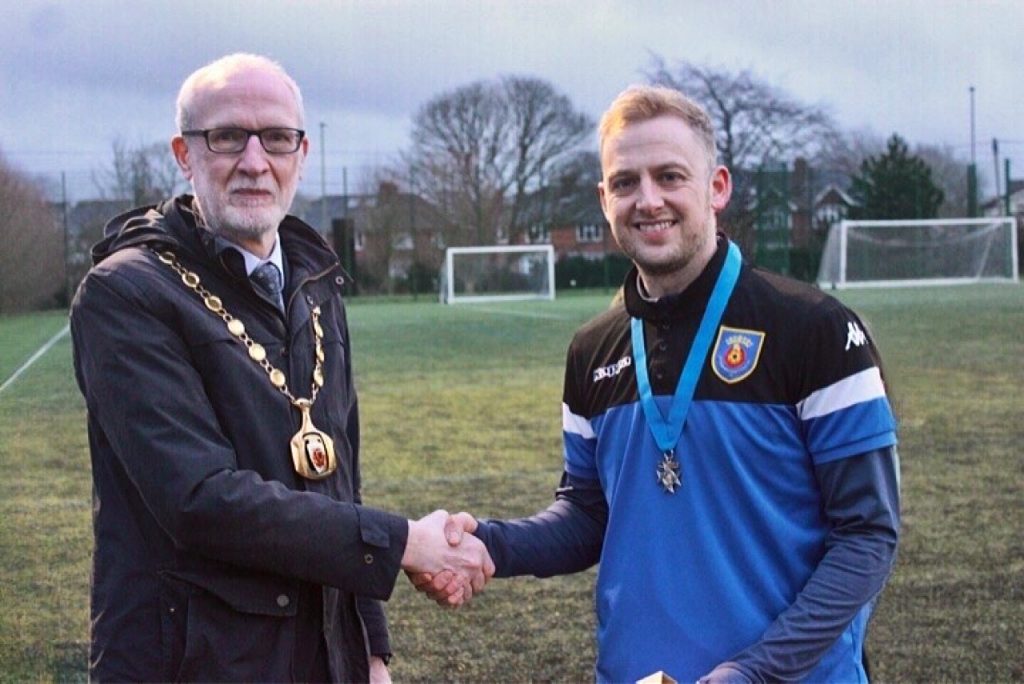 I’m a very proud Dad of three boys Harry, Lenny and Rafe. And husband to a wonderful wife Lucy. We live in Petersfield. This is my second season of coaching. I started last year when my son Harry joined Petersfield Town Glory. His team hadn’t played together before but gelled wonderfully and ended up winning a cup final in their first season. They have now progressed further up through the leagues and the whole club is amazing to be a part of. The team has so much support from the club and the amazing support from the boys themselves and their families who come to support them in numbers every weekend. I’m also going to coach my son Lenny’steam Petersfield Town Hotshots next year too as they start their journey in grassroots football. I’m also going to do a course this year to become an ambassador of a local mental health charity. It’s a topic close to my heart and myself and two of my close friends have organised 3 football events (before covid) which raised around £25,000 for the charities Young Minds and the National Autistic Society. I want to give something back to such a wonderful community which is giving so much back to myself and my family. Doing the football coaching is a real joy, and if it wasn’t for the help and support of the amazing Nigel Gardner who runs Aspire, who helped me every step of the way doing my courses then I wouldn’t have the know how to help such a wonderful bunch of players. The club as a whole is superbly run and there’s always so much support from everyone involved at the club.

Ben was nominated by a member of the public for the inspirational work he does as a football coach with Petersfield Town Juniors.

The nominator said that if anyone deserves an award for community service it is Ben, as I believe the teamwork he has developed will stay with those he coaches for life. He has helped the team bond in an amazingly professional way. Ben’s understanding and approach has generated a real team spirit, which is now shared amongst parents and grandparents.

Ben lives in Petersfield with his wife and three sons. He got into coaching when one of his sons joined Petersfield Town Glory – an under nines team. The team hadn’t played together before but gelled wonderfully and ended up winning a cup final in their first season. They have now progressed further up through the leagues.

Ben describes how the team has so much backing from the club, along with amazing support from the children and their families who come in numbers every weekend. Doing the football coaching, he says, is a real joy.

There is more to Ben that just the coaching though. He is doing a course this year to become an ambassador of a local mental health charity. It’s a topic close to Ben’s heart and, with two of his close friends, he has organised three football events which raised around £25,000 for the charities Young Minds and the National Autistic Society.

Ben says that he is motivated by the fact that he wants to give something back to such a wonderful community which is giving so much to him and his family.

I am pleased to have presented Ben with a Mayor’s Award.

Gethin has been a long-standing public member of the Council’s Town Development Committee, being voted on to the committee in February 2019 and has since contributed greatly, particularly in suggesting ways to encourage cycling and improving cycle routes.

Gethin was invited to become the Active Travel Working Party Chairman in May 2019 and has served in that post to the present day. Gethin works on the Petersfield Operations and Strategy Groups, meeting with Town, County and District officers and members.  He has contributed to comprehensive briefs to identify difficulties and solutions to some of the major road junctions in Petersfield.  In addition to this, he is co-author of a comprehensive brief for the Town Spine Project. Gethin is also a member of the working party reviewing the Petersfield Neighbourhood Plan.

Gethin enjoys cycling as a hobby and contributes to many other cycling community groups in Petersfield.

Gethin enthusiastically volunteers a great deal of his time to the benefit of Petersfield’s residents and is, I feel, a well-deserved recipient of the award. 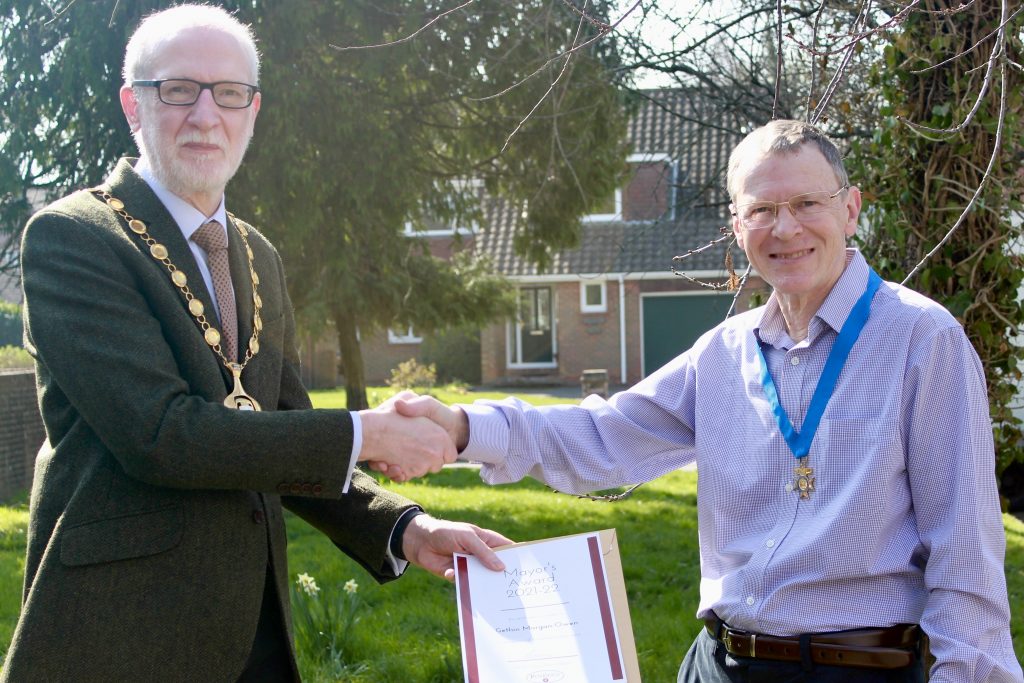 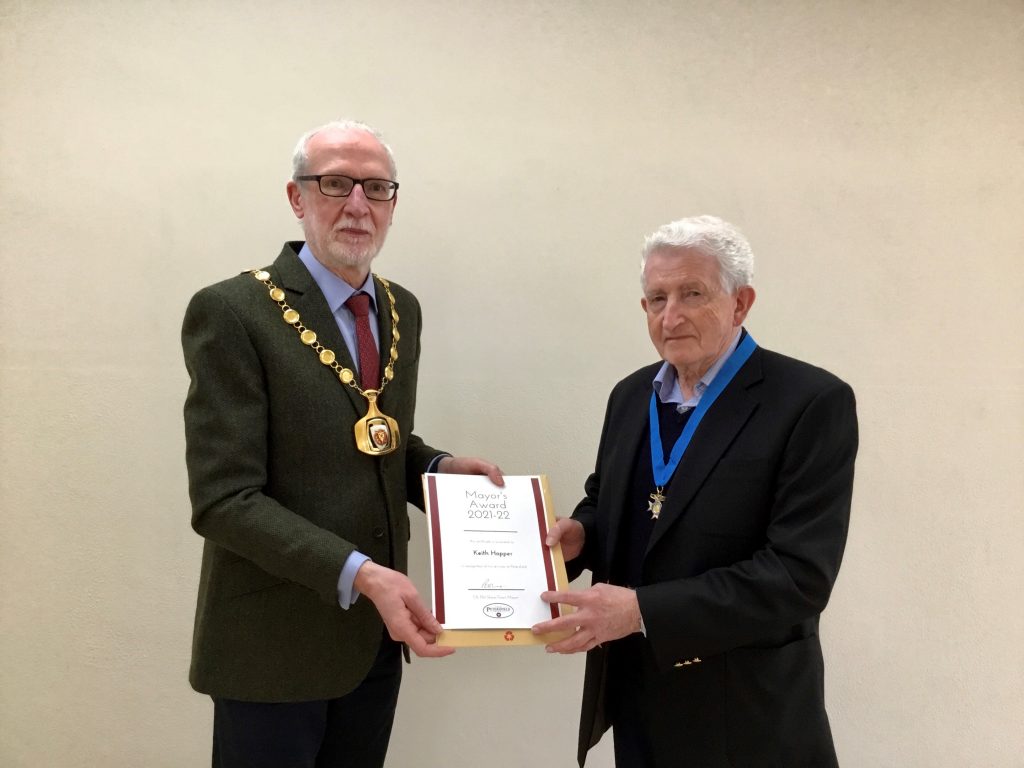 Keith is a retired Chartered Highways Engineer and first learned about the Town Council forming of a Town Development Committee to deliver the Petersfield Neighbourhood Plan in April 2016 when it was discussed at the East Hampshire Travel Plan Network.

Keith joined the Town Development Committee in July 2019 and later that year joined the Active Travel Working Party. Working alongside Gethin Morgan-Owen, Keith has used his highways expertise to produce the major junction reports and town spine reports.  Keith is a member of the Petersfield Operations and Strategy Groups, working with Councillors from all three tiers of local government. Keith is also a member of the working party reviewing the Petersfield Neighbourhood Plan where his knowledgeable input has been invaluable.

Keith’s willingness to get involved and share his knowledge and expertise makes him a great asset to the Town. It also makes him an ideal person to receive this award.

Ann was nominated by a member of the community. The nomination described how Ann has been a key member of the Winton House Centre for more than 20 years. Initially retained to clean the centre she became one of the most relied upon members of the Winton House staff and has played an important role in almost all the community support activities provided by the centre. Ann is always cheerful and ready to help, she will be sorely missed when she retires.

The nomination goes on to say that, in addition to keeping the whole centre spick & span there is no doubt that her efforts in the Pop In Tea Room have contributed to its consistent awarding of a level 5 Food Hygiene Certificate. But Ann’s contribution to the running of the Pop In has been far more than just cleaning. She has been the main buyer of supplies for many years always looking for the best value and quality available in Petersfield. She has also been one of the key makers of the homemade cakes, the Pop In is so proud of. Ann has always been the first person to volunteer to fill in when there is a vacancy in the rota of volunteers who run the Tea Room, serving customers, and washing up.

Alongside this devoted work, Ann has always brought an air of lively friendliness to the working of the centre which has resulted in many customers saying how much they like the Pop In because the service makes them feel important and special. In short, Ann has made a huge contribution to the running of the centre well beyond the formal demands of her employment. The nominator concluded that it is for these reasons we ask that you recognise Ann’s contribution to the Petersfield community by making her one of your awardees – I am very pleased to recognise what Ann has achieved and to present her with an award. 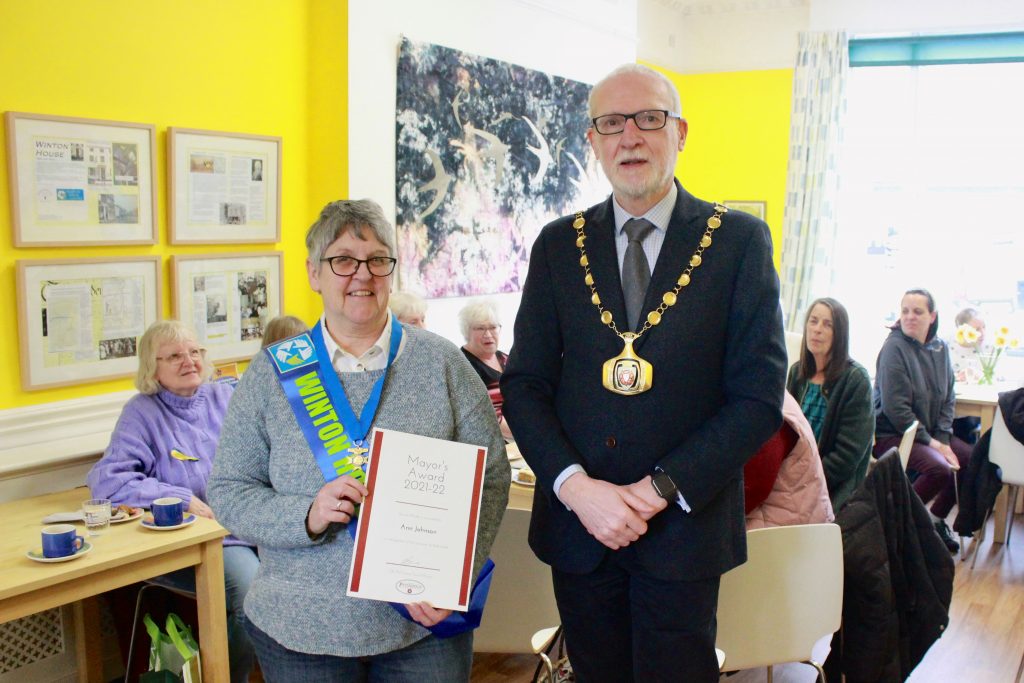