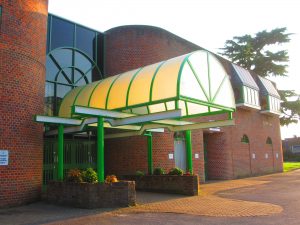 The Festival Hall is a versatile, multi-purpose venue, suitable for all kinds of events. Perfect for all music, drama and dance performances, it’s also an ideal choice for exhibitions, fairs, business meetings, corporate functions, dinner-dances and galas.

The Festival Hall is located in the heart of Petersfield, next door to the Town Hall and with ample pay-and-display car-parking nearby. Easily accessible by road and rail from London, Hampshire and the South of England, it offers flexible space and superb facilities – the perfect setting, whatever the occasion.

Visit the The Festival Hall page for up to date information about What’s On!

How the Festival Hall Came About?

The Petersfield Musical Festival was founded in 1901 and took place every March in the Drill Hall which was converted for army use from a large maltings in Dragon Street.  In spite of short-comings as a concert hall the ‘Festival’ used it for nigh on 30 years.

At this time the Petersfield Urban District Council had purchased land at Pound Meadow with a view to building its headquarters and was suitably impressed with the activities of the ad hoc committee.  It entered into an agreement with the committee that a new concert hall would be added to the project, the financial basis being that the U.D.C would pay for the offices and what was a small ‘Parish Hall’ and the Committee would raise the necessary finance for what was for many years called the Large Hall (now called the Festival Hall).  The Small Hall is now converted into offices at the S.E. part of the Town Hall.

“All this was made possible by the generosity of Dr J.P. Gabbatt who promised a subscription of £500 towards the Hall on condition that it suited the needs of the Musical Festival, was appropriate architecture and that a similar sum was collected before the end of April.  No further inspiration was needed by Dr. Roberts who, with the help of Mr. Mackarness and Miss Kathleen Merritt, conductor of the Petersfield Choral Society, galvanised the town into action.  Well before the concluding date of Dr. Gabbett’s contract, £2000 had been given or promised.  More was still needed and money-making activities proliferatred.  Subscriptions ranging from 1/- to £250 had already been given; House to house collections were made; there was a white elephant and furniture sale (coffee mornings had not then been invented!)  Entertainments were arranged and fetes were held; money was sent from a wide area by music lovers of music and contributed to be the Musical Festival.  In two years almost all the money required (£5,500) had been raised and the hall with the Urban District Council offices was built on the site provided by the council.”

The Festival Hall portrait of Dr. Harry Roberts was unveiled by Sir Adrian Boult during the interval of Petersfield Orchestra Saturday afternoon concert during the late 1949.  The concert was given under the baton of Kathleen Merritt.

In February 1969 Kenneth Hick, then Urban District Councillor for four years, suggested that £200 per year be budgeted for stage improvements.  This was agreed too and five year’s allocation eventually being spent on improvements to the overhead grid, this initiated the process of improvements to the Large Hall as it was then called.

From Barn to Prestige Multi-Purpose Auditorium

The naming of the Festival Hall celebrates the upgrading of facilities in 1979. This consisted of the provision of tiered seating and the construction of three new dressing rooms along the back of the stage.  Prior to this, out of viewing crossing to the other side of the stage meant having to go outside, in all weathers and some cast dressing used the small hall rooms by the sound pod on the stage right hand wall of the auditorium.  The pod was included in the ’79 improvements.  Also re-vamped at the time were the Town Hall ground floor toilets.  One further improvement was the provision of a rear – stage piano store shaped to accommodate the Festival Grand Piano.

In 1986/87 further (on budget) improvements were made, financed by the staged sale of land at the end of Heathfield/Barnfield Roads –

The driving force behind this major project was Kenneth Hick and the result of four years planning and consultation.  The Rose Room was constructed, the rear-stage area was enlarged and re-vamped, a scenery dock was built together with the Green Room and the orchestra pit/apron stage life area constructed.  With the advent of the lifts it became possible to store the concert grand piano at floor level and the piano store/chair store added to the project.

A further pod for lighting control was added to the stage left wall.  In many ways perhaps the most significant improvement was a new foyer entrance to the hall which also provided further public toilets and access facilities for disabled people enabling them to take a full part in the activities at the Festival Hall.  The architect for this and the 1979 improvements was Kenneth Claxton. G.F.Eade & Son (Petersfield) and Braziers of Southampton were the respective contractors.

The story is one of continuous improvement throughout its life, which could only take place with the support of the people of the Town of Petersfield.