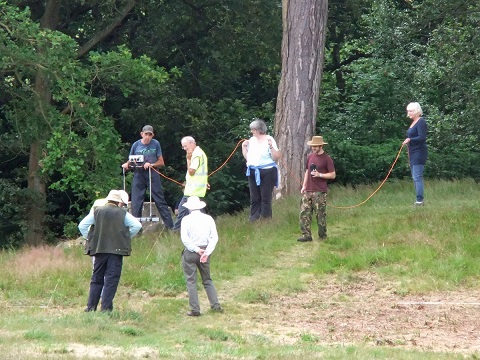 ‘People of The Heath’ Archaeological Project

June saw the start of the archaeology project on the Heath. At an Advisory Committee meeting on the 23rd of the month it was officially launched. The archaeologists George Anelay and Dr Stuart Needham solicited the views of the Committee, which has representatives from all bodies with an interest in the archaeology and management of the Heath.

Before any excavation, the area has to undergo a detailed survey. After clearance work organised by the Friends of Petersfield Heath, a geophysical survey took place in the last week of June under the lead of Neville and Mary Haskins. The technique used to do this is called earth resistance monitoring. The resistivity meter measures how well a small current flows through the soil. This depends on the amount of moisture. Three areas were covered over the four days by a total of 32 people, all volunteers, of whom 15 were doing a geophysical survey for the first time.

The survey covered a prominent barrow and two other areas nearby. Geophysics can reveal the presence of buried features, such as ditches, as well as slight banks; it can also give clues as to the make up of the barrows. This information can help determine where exactly to place excavation trenches. Before that can start, however, a surveyor will analyse the terrain from a topographical point of view.

A detailed report can be found on http://www.petersfieldmuseum.co.uk/news-events-exhibitions.php

We are still looking for volunteers, so please get in touch with the Curator Sophie Yaniw if you want to be involved curator@petersfieldmuseum.co.uk or 01730 262601. 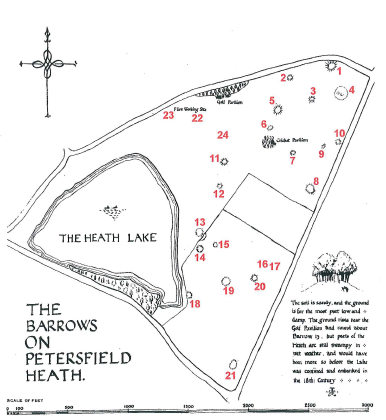